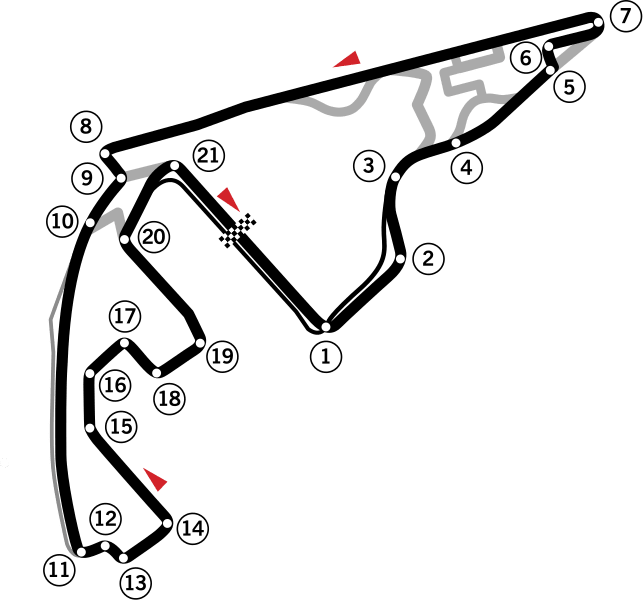 The 2020 Abu Dhabi Grand Prix is scheduled to take place at the Yas Marina Circuit in Yas Island, Abu Dhabi, UAE. The Abu Dhabi Grand Prix was announced in early 2007 at the Abu Dhabi F1 Festival in the United Arab Emirates. The first race took place on 1 November 2009, held at the Hermann Tilke designed Yas Marina Circuit. On 25 June 2008 the FIA announced the provisional 2009 Formula One calendar including the Abu Dhabi Grand Prix as the 19th and final race of the season on 15 November. On 5 November 2008, however, it was announced that the race would be held as the season finale on 1 November, two weeks before the initially planned date, as the 17th and final race. The inaugural race was Formula One's first ever day–night race, starting at 17:00 local time. Floodlights used to illuminate the circuit were switched on from the start of the event to ensure a seamless transition from daylight to darkness. Subsequent Abu Dhabi Grands Prix have also been day–night races.

The circuit was designed by Hermann Tilke, and is situated on Yas Island, about 30 minutes from the capital of the UAE, Abu Dhabi. Yas Marina is the second Formula One track in the Middle East, with the first being in Abu Dhabi. A two-day GP2 Asia Series test was held to officially open the circuit, which was held a week before the 2009 Abu Dhabi Grand Prix. It also hosted the opening event for the Australian V8 Supercars series, the Yas V8 400, in February 2010. Outside motorsport the circuit was used for the final stage of the inaugural Abu Dhabi Tour cycle race in 2015. The circuit has FIA Grade 1 license.

The twenty-one corners twist through Yas Island off the Abu Dhabi coast, passing by the marina and through the Yas Hotel Abu Dhabi designed by New York-based architects Hani Rashid and Lise Anne Couture of Asymptote Architecture with a striking facade lighting design by Rogier van der Heide, and winding its way through several long straights and tight corners. The marina-based development includes a theme park, a water park, as well as residential areas, hotels and beaches.

The circuit has five grandstand areas (Main Grandstand, West Grandstand, North Grandstand, South Grandstand and Marina Grandstand (aka Support)) and part of its pit lane exit runs underneath the track. It also houses a team building behind the pit building, Media Center, Dragster Track and VIP Tower. Additionally, one of the run-off areas runs underneath the West grandstand. Seating Capacity is 41,093 spanned under Area of 161.9HA. the track length s 5.5 km with the longest straight being 1.14km (1,246.72yd). The change of elevation is about 10.7m.

The circuit was built by main contractor Cebarco-WCT WLL, under contract from developer Aldar Properties. Among the sub-contractors involved were KOH AH HING (KAHBINA) from Malaysia (structural contractor), as well as specialised subcontractors like Voltas (MEP), PKE-Siemens (MEP), Able-Middle East (earthworks), Hamilton International (interior) and Bau Bickhardt (track) to name a few. The circuit was constructed with a permanent lighting system provided by Musco Lighting, similar to that also installed at the Losail Circuit in Qatar. Yas Marina Circuit is the largest permanent sports venue lighting project in the world; previously that title was held by Losail.

The surface of the track is made of graywacke aggregate, shipped to Abu Dhabi from a Bayston Hill quarry in Shropshire, England. The surface material is highly acclaimed by circuit bosses and Formula One drivers for the high level of grip it offers. The same aggregate material is used at the Abu Dhabi International Circuit for the Abu Dhabi Grand Prix. On 7 October 2009, the circuit was granted final approval to hold Formula One races by the FIA. Bruno Senna was the first driver to complete a test run on the circuit. GP3 visited Abu Dhabi for the first time at the end of the 2013 season.

After the first practice sessions at the 2009 Abu Dhabi Grand Prix, the circuit was welcomed by the drivers, with Nico Rosberg commenting that every corner was 'unique', while double World Champion Fernando Alonso echoed his sentiments, stating that it was enjoyable because there was always something to do. Force India's Adrian Sutil rated the circuit as being better than Formula One's other night race in Singapore as he felt there was too much light at Marina Bay. Not all of the drivers were complimentary, with Giancarlo Fisichella expressing a particular dislike of the pit exit, which dips under the main circuit by way of a tunnel. Although the pit exit remained free of incidents for the early practice sessions, Fisichella claimed that it was both very difficult and dangerous. Kimi Räikkönen notoriously gave his thoughts on the circuit, stating "the first few turns are quite good, but the rest of it is shit".