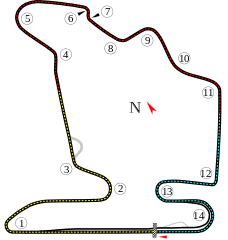 The first Hungarian Grand Prix was held on 21 June 1936 over a 5-kilometre (3.1-mile) track laid out in Népliget, a park in Budapest. The Mercedes-Benz, Auto Union, and the Alfa Romeo-equipped Ferrari teams all sent three cars and the event drew a very large crowd. However, politics and the ensuing war meant the end of Grand Prix motor racing in the country for fifty years.

The first Hungarian Formula1 Grand Prix, held in August of 1986, was the culmination of Bernie Ecclestone’s desire for the sport to venture beyond the Iron Curtain. After considering Moscow, the initial Hungarian plan was for a race to be held on the streets of the capital Budapest. In the end, the communist authorities in Hungary decided to construct a purpose-built track 19km outside of the capital. The Hungaroring circuit was completed in just eight months and the first race drew an estimated 200 000 fans from all over the Eastern Bloc.

The tight, twisty Hungaroring circuit is located in a valley, which provides excellent visibility for fans. From higher vantage points, it’s possible to see around 80% of the circuit. At 4.381km, the Hungaroring is the third shortest Formula1 circuit on the current calendar and the second slowest after Monaco. The tight layout of the circuit makes overtaking difficult, one reason why many drivers and fans don’t rate the track highly. The race is held each year at the height of the European summer, often in stifling heat. In 28 years, rain has only fallen during the race three times, in 2006, 2011 and 2014.