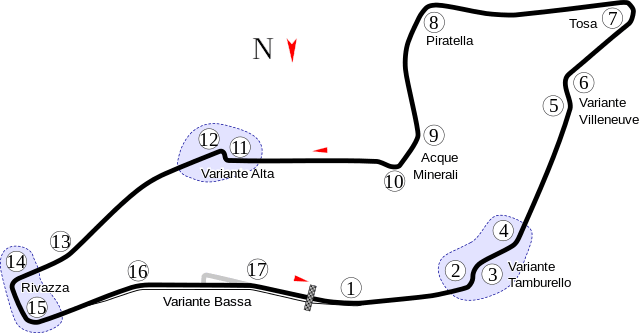 The Autodromo Internazionale Enzo e Dino Ferrari is a race track near the Italian town of Imola, 40 kilometres (24.9 mi) east of Bologna. It is one of the few major international circuits to run in an anti-clockwise direction. The circuit is named after Ferrari's late founder, Enzo Ferrari, and his son, Alfredo Ferrari, who died in 1956 at age 24. The circuit has a FIA Grade One license.

It was the venue for the San Marino Grand Prix. For many years, two Grands Prix were held in Italy every year, so the race held at Imola was named after the nearby state. It also hosted the 1980 Italian Grand Prix, the Italian Grand Prix usually takes place at the Autodromo Nazionale Monza. When Formula One visits Imola, it is seen as the home circuit of Scuderia Ferrari, and masses of supporters come out to support the local team.

Imola first hosted a non-championship F1 race in 1963, but it would take some politicking with Monza in 1980 before the track was awarded the honour of hosting the Italian Grand Prix for the first time that year. From 1981, the two tracks worked together in perfect harmony, with Imola taking on its famous ‘San Marino’ title, and going on to host a total of 27 Grands Prix up until 2006.

The track was inaugurated as a semi-permanent venue in 1953. It had no chicanes, so the runs from Acque Minerali to Rivazza, and from Rivazza all the way to Tosa, through the pits and the Tamburello, were just straights with a few small bends; the circuit remained in this configuration until 1972.

In April 1953, the first motorcycle races took place, while the first car race took place in June 1954. In April 1963, the circuit hosted its first Formula One race, as a non-championship event, won by Jim Clark for Lotus. A further non-championship event took place at Imola in 1979, which was won by Niki Lauda for Brabham-Alfa Romeo. In 1980 Imola officially debuted in the Formula One calendar by hosting the 1980 Italian Grand Prix. It was the first time since the 1948 Edition held at Parco del Valentino that the Autodromo Nazionale Monza did not host the Italian Grand Prix. The race was won by Nelson Piquet and it was such a success that a new race, the San Marino Grand Prix, was established especially for Imola in 1981. The race was held over 60 laps of the 5 kilometre circuit for a total race distance of 300 kilometres.

Despite the addition of the chicanes, the circuit was subject to constant safety concerns, mostly regarding the flat-out Tamburello corner, which was very bumpy and had dangerously little room between the track and a concrete wall which protects the Santerno river that runs behind it. In 1987, Nelson Piquet crashed heavily during practice after a tyre failure and missed the race due to injury. In the 1989 San Marino Grand Prix, Gerhard Berger crashed his Ferrari at Tamburello after a front wing failure. Michele Alboreto also had a fiery accident at the Tamburello corner testing his Footwork Arrows at the circuit in 1991 but escaped injury. Riccardo Patrese also had an accident at the Tamburello corner in 1992 while testing for the Williams team. The death of Ayrton Senna on 1 May 1994 sealed the fate of the corner being run flat out ever again.