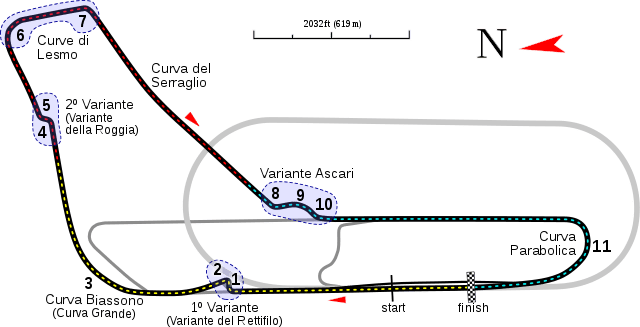 The Autodromo Nazionale di Monza is a historic race track near the city of Monza, north of Milan, in Italy. Built in 1922, it is the world's third purpose-built motor racing circuit after those of Brooklands and Indianapolis. The circuit's biggest event is the Formula One Italian Grand Prix. Except for in 1980, the race has been hosted there since the series' inception.

Built in the Royal Villa of Monza park in a woodland setting, the site has three tracks – the 5.793-kilometre (3.600 mi) Grand Prix track, the 2.405-kilometre (1.494 mi) Junior track, and a 4.250-kilometre (2.641 mi) high speed oval track with steep bankings which has been unused for many decades and has been decaying for years until restorations in the 2010s. The major features of the main Grand Prix track include the Curva Grande, the Curva di Lesmo, the Variante Ascari and the Curva Parabolica. The high speed curve, Curva Grande, is located after the Variante del Rettifilo which is located at the end of the front straight or Rettifilo Tribune, and is usually taken flat out by Formula One cars.

Constructed in just 110 days in 1922, the Autodromo Nazionale Monza was the world’s third purpose-built race track, coming after Brooklands in the UK and Indianapolis in the US. Like those two tracks, the original circuit featured a daunting series of banked curves, as well as much of the ‘outfield’ section that’s still in use today. Monza opened its doors on September 3 1922, just a week before it hosted that year’s Italian Grand Prix. It was then part of the original Formula 1 calendar in 1950, and has held the Italian Grand Prix every year bar one since.

The parkland setting of Monza, located just to the north east of Italy’s fashion capital Milan, makes for a relaxed, leafy setting for a Grand Prix, while the preserved Monza banking – spot it in the background as the cars exit the Parabolica, as well as on the flyover bridge they pass under en route to the Variante Ascari – leaves you in no doubt that you’re in the presence of a very special race track.

Drivers are on full throttle for most of the lap due to its long straights and fast corners, and is usually the scenario in which the open-wheeled Formula One cars show the raw speed of which they are capable: 372 kilometres per hour (231 mph) during the mid-2000s V10 engine formula, although in 2012 with the 2.4L V8 engines, top speeds in Formula One rarely reached over 340 kilometres per hour (211 mph); the 1.6L turbocharged hybrid V6 engine, reduced-downforce formula of 2014 displayed top speeds of up to 360 kilometres per hour (224 mph). The circuit is generally flat, but has a gradual gradient from the second Lesmos to the Variante Ascari. Due to the low aerodynamic profile needed, with its resulting low downforce, the grip is very low; understeer is a more serious issue than at other circuits; however, the opposite effect, oversteer, is also present in the second sector, requiring the use of a very distinctive opposite lock technique. Since both maximum power and minimal drag are keys for speed on the straights, only competitors with enough power or aerodynamic efficiency at their disposal are able to challenge for the top places.

A lap in a Formula One car would be as follows - Cars approach the first corner at 340 kilometres per hour (210 mph) in eighth gear, and brake at about 120 metres (390 ft) before the first chicane – the Variante del Rettifilo – entering at 86 km/h (53 mph) in first gear, and exiting at 74 kilometres per hour (46 mph) in second gear. Good traction out of the first corner is imperative for a quick lap. Conservation of speed through the first chicane is made possible by driving the straightest line, as a small mistake here can result in a lot of time being lost through the Curva Grande down to the Variante della Roggia chicane in seventh gear, at 330 kilometres per hour (210 mph). The braking point is just under the bridge. The kerbs are very vicious and it is very easy for a car to become unbalanced and a driver to lose control. This chicane is probably the best overtaking chance on the lap, as it is the only one with the "slow corner, long straight, slow corner"; one of the characteristics of modern circuits. The Curve di Lesmo are two corners that are not as fast as they used to be, but are still challenging corners. The first is blind, entered at 264 km/h (164 mph) in fifth gear, dropping to fourth gear at 193 km/h (120 mph), and has a slight banking. The second is a fifth gear entry at 260 km/h (160 mph), apexing in third gear at 178 kilometres per hour (111 mph), and it is very important that all the kerb is used. A mistake at one of these corners will result in a spin into the gravel, while good exits can set you up for an overtaking move into Variante Ascari. The downhill straight down to Variante Ascari is very bumpy under the bridge. Variante Ascari is a very tricky sequence of corners and is key to the lap time. The final challenge is the Curva Parabolica: approaching at 335 kilometres per hour (208 mph) in seventh gear, cars quickly dance around the corner, apexing in fourth gear at 215 kilometres per hour (134 mph) and exiting in fifth gear at 285 kilometres per hour (177 mph), accelerating onto the main start/finish straight. A good exit and slipstream off a fellow driver along the main straight can produce an overtaking opportunity under heavy braking into Variante del Rettifilo; however, it is difficult to follow a leading car closely through the Parabolica as the tow will reduce downforce and cornering speed. Maximum speed achieved in a 2019 Formula One car is 359.7 km/h (223.5 mph), established at the end of the start/finish straight. They experience a maximum g-force of 4.50 during deceleration, as the track has many dramatic high to low speed transitions. Cars are on full throttle for 80% of the lap, and hit their Vmax on the circuit’s 1.1km start/finish straight.