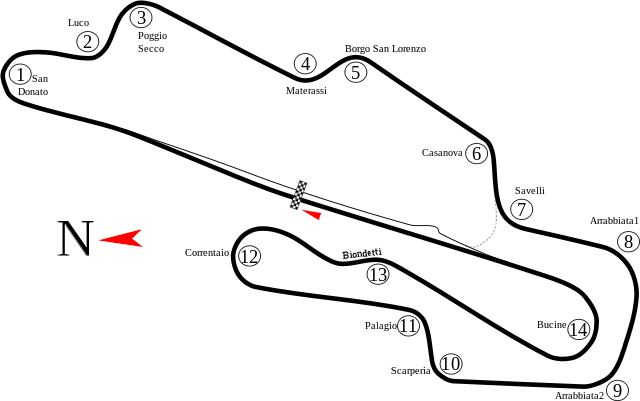 Mugello Circuit (Autodromo Internazionale del Mugello) is a race track in Scarperia e San Piero, Tuscany, Italy. The circuit length is 5.245 km (3.259 mi). It has 15 turns and a 1.141 km (0.709 mi) long straight. The circuit stadium stands have a capacity of 50,000. Although the ‘Mugello’ name had been associated with racing in that area of Tuscany since back in 1914 – having previously referred to a fearsome 61-km road racing course – the Mugello circuit proper opened in June 1974. Ferrari then purchased the track, based a 120-km drive away from their headquarters, in 1988.

The present-day closed Mugello circuit was constructed in 1973 and opened in 1974, about 5 km east from the easternmost part of the original road circuit. The circuit was used for the in-season test during the 2012 Formula One season, by all teams except HRT. An unofficial track record of 1:21.035 was set by Romain Grosjean during the test. The track was praised by Mark Webber, who stated that he "did 10 dry laps today around Mugello, which is the same as doing 1000 laps around Abu Dhabi track in terms of satisfaction". Four-time Formula One world champion Sebastian Vettel said “unfortunately we don’t have this track on the calendar. It’s an incredible circuit with a lot of high-speed corners”. It holds a grade 1 FIA license, meaning that it meets the standards to host a Formula 1 race.

Despite having been a fixture for a number of international series over the years, most notably MotoGP, 2020 marks the first time that Mugello hosts a Formula 1 World Championship event. On 10 July 2020, it was announced that the circuit would be the ninth race in the 2020 Formula One calendar, marking the 1000th Grand Prix for Ferrari.

Mugello is a swooping, undulating circuit that the drivers almost universally adore. Set in a valley, the natural topography makes a lap of the 5.2-km track which has hosted many an F1 test in its time, including Kimi Raikkonen’s famous first outing with Sauber a real rollercoaster ride, with the stomach-churning run through Casanova, Savelli and into Arrabbiata 1 and 2 a particular highlight.