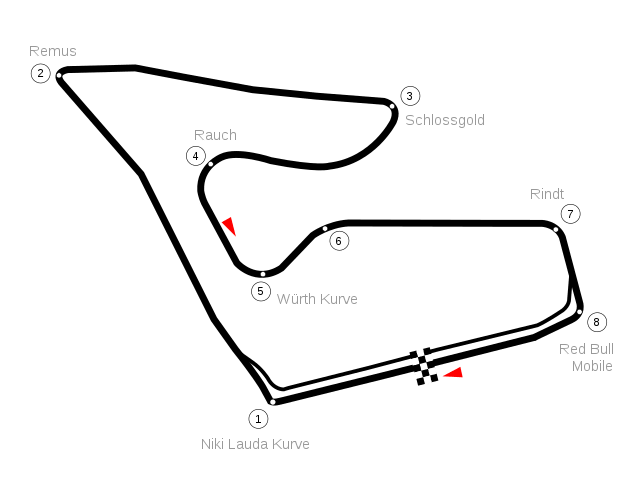 Formula 1 Rolex Grosser Preis Von Österreich 2020 (Austrian Grand Prix), which takes place over 71 laps of the 4.318-kilometre Red Bull Ring in Spielberg on Sunday, July 5 2020. The Austrian Grand Prix returned to the Formula 1 calendar in 2014 after an eleven-year hiatus. It’s hosted at the picturesque Red Bull Ring, the most recent incarnation of the Österreichring circuit, which debuted back in 1970.

The Red Bull Ring will host the first two rounds of the updated 2020 Formula 1 calendar, but both races will be held behind closed doors with no spectators present. The 2020 Austrian Grand Prix takes place on July 3-5 and the 2020 Styrian Grand Prix on July 10-12.

The A1-Ring, as it was then called, was opened in 1996, with Formula 1 arriving at the circuit a year later. Jacques Villeneuve won the race, while Jean Alesi had a spectacular crash when his Benetton climbed up the Ferrari of Eddie Irvine. Alesi’s team mate Gerhard Berger, meanwhile, used his home Grand Prix to announce his F1 retirement.

The A1 Ring was not a money maker however, and was removed from the calendar for 2004 because of Austria’s support for anti-tobacco legislation in the EU. Enter Dietrich Mateschitz, the founder of Red Bull, who purchased the circuit and announced big redevelopment plans. No sooner had work got underway however, including demolishing the existing pit buildings, when local authorities upheld environmental complaints and halted work on the track. It remained idle for six years until Mateschitz finally completed a less ambitious revival of the circuit. The newly named Red Bull Ring opened in 2011. It wasn’t too long before Mateschitz persuaded Bernie Ecclestone to sign a new seven-year Formula 1 hosting contract. The first race was staged in 2014 and attracted a sell-out crowd.