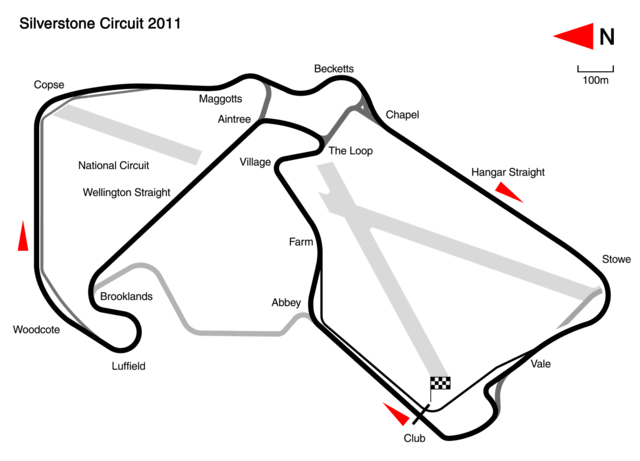 Silverstone Circuit is a motor racing circuit in England located next to the Northamptonshire villages of Silverstone and Whittlebury. Because of its long association with motor sport, it is familiarly known as "the Home of British Motor Racing"

The Silverstone circuit is on the site of a World War II Royal Air Force bomber station, RAF Silverstone, which opened in 1943. The station was the base for No. 17 Operational Training Unit. The airfield's three runways, in classic WWII triangle format, lie within the outline of the present track. Built on the site of a World War II airfield, Silverstone first hosted the British Grand Prix in 1948, a race which attracted a reported 100 000 spectators. Two years later in 1950, Silverstone was chosen as the venue for the first race on the inaugural Formula 1 World Championship and the track is one of only four Grands Prix from the first year of the World Championship to remain a part of today’s F1 calendar (the others being Monaco, Spa and Monza). The layout of Silverstone has undergone significant changes over the years, mostly in a bid to reduce speed and increase safety.

At 5.891km, Silverstone is the third longest F1 circuit on the current calendar. Only Spa Francorchamps in Belgium (7.004km) and the Baku City Circuit (6.003km) are longer. Together with Italy, Britain is the only country to have held a Grand Prix in every year of the World Championship since 1950. The 2019 event was the 70th time that the race had been run as a World Championship event since the inaugural season in 1950, and the 53rd time that a World Championship round had been held at Silverstone.