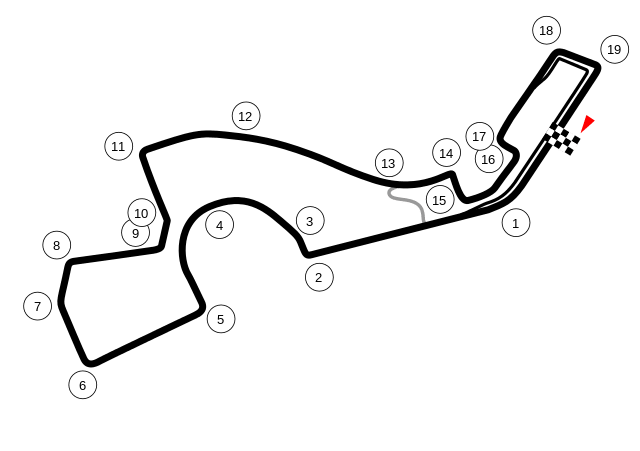 The Sochi Autodrom was Designed by Hermann Tilke, is effectively a street circuit, evolving out of the internal roads of the park built for the city’s 2014 Winter Olympics. The circuit is similar to the Beijing Olympic Green Circuit and the Sydney Olympic Park Circuit in that it runs around a former Olympic complex; in this case, the Sochi Olympic Park site, scene of the 2014 Winter Olympic Games. The inaugural World Championship Russian Grand Prix took place in 2014, beginning a seven-year contract.

The 5.848-kilometre (3.634 mi) circuit is the fourth-longest circuit on the Formula One calendar, behind Spa-Francorchamps in Belgium, Baku City Circuit in Azerbaijan and Silverstone in the UK. The circuit is built around the Sochi Olympic Park, that is the coastal cluster of Olympic venues built for the 2014 Winter Olympics that have hosted competitions in ice hockey, speed skating, curling, figure skating, short track etc., and Fisht Olympic Stadium where Opening and Closing ceremonies were held. The surface was not laid until after the Closing Ceremony of the Olympics. The circuit has the start grid on the northern edge of the Olympic Park next to the railway station, heading southwest towards the Black Sea coast. Then it runs along the outer edge of the central Sochi Medals Plaza, that is the podium for Olympic medal ceremonies. The long Turn 3 is one of the most notable on the circuit, and has been compared to the famous Turn 8 in Istanbul Park. Then, the track circles the plaza counterclockwise and makes three turns around the Bolshoy Ice Dome. Then follow series of tight corners before turning north where the track skirts the edge of the Olympic Park, above the main Olympic Village and the Adler Arena Skating Center. Then it passes the skating and curling centres, before funneling up behind the pit paddock toward the train station, and completing a circuit with two ninety-degree right turns.

The Sochi Autodrom, previously known as the Sochi International Street Circuit and the Sochi Olympic Park Circuit, is a 5.848 km Formula One permanent race track in the Black Sea resort town of Sochi in Krasnodar Krai, Russia.Sochi Autodrom hosted Formula 1’s first ever Russian Grand Prix on October 12 2014. The race was won by Mercedes’ Lewis Hamilton, who was midway through a five-race winning streak that would ultimately see him clinch that year’s drivers’ title.

Looking at a map of the track, your eye can’t help but be drawn to the epic Turn 3, a 750m constant-radius left-hander taking the drivers around the outside of the dramatic Poyushchiye fountain. The rest of the track is characterised by a series of 90-degree bends coupled to some rapid, flowing straights-that-aren’t-straight. Occupying a prime spot on the Black Sea, Sochi is one of Russia’s top beach resorts in the summer, while the race’s early autumn slot should mean it’s just about warm enough for you to work on your tan. If you were inspired by the city’s Winter Olympics, however, you’re out of luck – the ski season in the resorts around Sochi doesn’t get going until December.