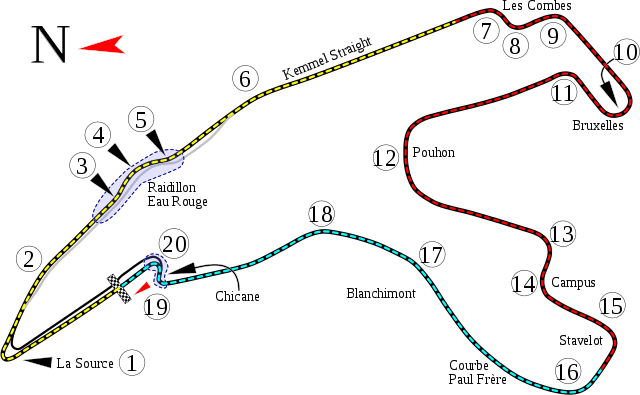 The Circuit de Spa-Francorchamps is a motor-racing circuit located in Stavelot, Belgium. It is the current venue of the Formula One Belgian Grand Prix, hosting its first Grand Prix in 1925, and has held a Grand Prix every year since 1983 (except 1984, 2003 and 2006). Spa also hosts several other international events including the 24 Hours of Spa and the World Endurance Championship 6 Hours of Spa-Francorchamps, and the TCR Spa 500. It is also home to the Uniroyal Fun Cup 25 Hours of Spa, one of the longest motor races in the world.

The circuit has undergone several redesigns through its history, most extensively in 1979 when the track was modified and shortened from a 14.10 km (8.76 mi) circuit using public roads to a 6.95 km (4.32 mi) permanent circuit due to safety concerns with the old circuit. Despite its name, the circuit is not in Spa but lies in the vicinity of the town of Francorchamps within the boundaries of the municipality of Stavelot, with a part in the boundaries of Malmedy.

The original, triangle-shaped track was built in 1921, with designers Jules de Thier and Henri Langlois van Ophem using public roads between the towns of Francorchamps, Malmedy, and Stavelot to create an amazing 14.9km circuit taking in the forests and rolling hills of the beautiful Ardennes region. The track was redeveloped in 1979, and although the new circuit is only half the original's length, it’s still the longest on the current calendar at 7.004km. Having hosted a non-championship Grand Prix as long ago as 1924, Belgium’s iconic circuit was one of just seven to be part of Formula 1’s maiden championship in 1950. That race was won by the legendary Juan Manuel Fangio, who led home an Alfa Romeo one-two ahead of team mate Nino Farina.

Spa is among Formula 1 drivers’ most loved tracks, with its mix of long straights and challenging fast corners allowing them to push their cars to the edge of their capabilities – if it’s dry, that is. The size of the track and the nature of Belgian weather means it can sometimes be raining on one part of the track and dry on another, meaning grip can vary from one corner to the next. Keep an eye on the thrilling Eau Rouge, arguably the most famous sequence of corners in the world, as the drivers flick left, right and then up the hill through Raidillon. Since its inception, Spa-Francorchamps has been known for its unpredictable weather. At one stage in its history it had rained at the Belgian Grand Prix for twenty years in a row. Frequently drivers confront a part of the course that is clear and bright while another stretch is rainy and slippery. The Belgian Grand Prix was designated the European Grand Prix six times between 1925 and 1973, when this title was an honorary designation given each year to one Grand Prix race in Europe. It is one of the most popular races on the Formula One calendar, due to the scenic and historical Spa-Francorchamps circuit being a favourite of drivers and fans.

The fearsome Eau Rouge/Raidillon corner, arguably the most famous on the current F1 calendar, features an elevation change of 35 meters from its lowest to highest point. Of current drivers, Kimi Raikkonen has the best record at Spa with four victories. Lewis Hamilton and Sebastian Vettel have each won three times. In 2019, Charles Leclerc became the first driver to score a maiden Grand Prix Victory at Spa since Michael Schumacher did so in 1992. Fernando Alonso never took a victory at Spa during his F1 career. Max Verstappen was born in Belgium to a Belgian mother, but decided to represent The Netherlands, where his father comes from. Nevertheless, Spa became his defacto ‘home race’ before the Dutch Grand Prix rejoined the calendar for 2020, and thousands of Dutch fans come out to support him here. At 7.004km long, Spa is the longest current F1 circuit. Despite this, it has one of the smaller spectator capacities on the current calendar (70,000 fans) Spa is not only famous for Formula 1. It also holds other popular annual events, including the Spa 24 hours and the 6 Hours of Spa Francorchamps for sportscars. The entry list for races at Spa was usually shorter than those at other events during the early years of Formula 1, largely due to the track’s fearsome nature. Despite taking his first F1 victory at Spa and going on to win the Belgian Grand Prix for four consecutive seasons, Jim Clark detested the track. Bruno Senna set the only fastest lap of his F1 career at the Belgian Grand Prix in 2012. Strangely, that’s something which his Uncle Ayrton never achieved, despite winning six Grands Prix at Spa. Michael Schumacher is the only driver to have won the World Championship at the Spa Francorchamps track. He claimed his seventh and final title here in 2004. 12 of the last 20 Belgian Grands Prix have been won by less than five seconds. The largest win margin here came in 1963, when Jim Clark won by 474 seconds!